The calendar showed 15th August, it was the morning of Independence day. We had decided to celebrate this big day at the historical Kargil War Memorial. An army personnel whom we met just before entering Dras told us that the ceremony of the Independence day would start at 8 in the morning. Getting up early had been the most difficult task on our trip after arrangement of luggage on our motorcycles. Fortunately, due to the incessant ringing of the alarm we got up around 7, realizing the need to rush without further wasting any time in order reach Kargil War Memorial on time. I ran towards the bathroom to take bath only to realize that the water was freezing cold. Thankfully because of the cold water none of us dared to bathe which saved a lot of our precious time.

Two of our group members were too lazy to join us for the Independence Day ceremony and decided to sleep for some more time. Leaving them and our luggage at the hotel we left for  the Kargil War Memorial. Our excitement level was at its peak. Parking our motorcycles on the opposite, side we finally entered that Historical place. The entrance was grand with KARGIL WAR MEMORIAL written at the top in big fonts. We were welcomed with a smile by a soldier standing at the gate.

Also known as Vijay path, the memorial is located in the foothills of the Tololing Hill, on the Srinagar-Leh National Highway 1D. It was built in the honour of the soldiers and officers who sacrificed their lives fighting bravely during the 1999 Kargil War between India and Pakistan. I wondered how Indian soldiers would have fought and endured in the extreme cold conditions at Dras, which is said to be the second coldest place in the world.

Upon entering we saw the Tricolor swaying high, with the mighty Tololing mountain range in the back making it a memorable sight. An army personnel told us that we would have to wait for some more time to watch the ceremony. He also told us some interesting stories about the war and also gave us an insight about the life of a soldier. 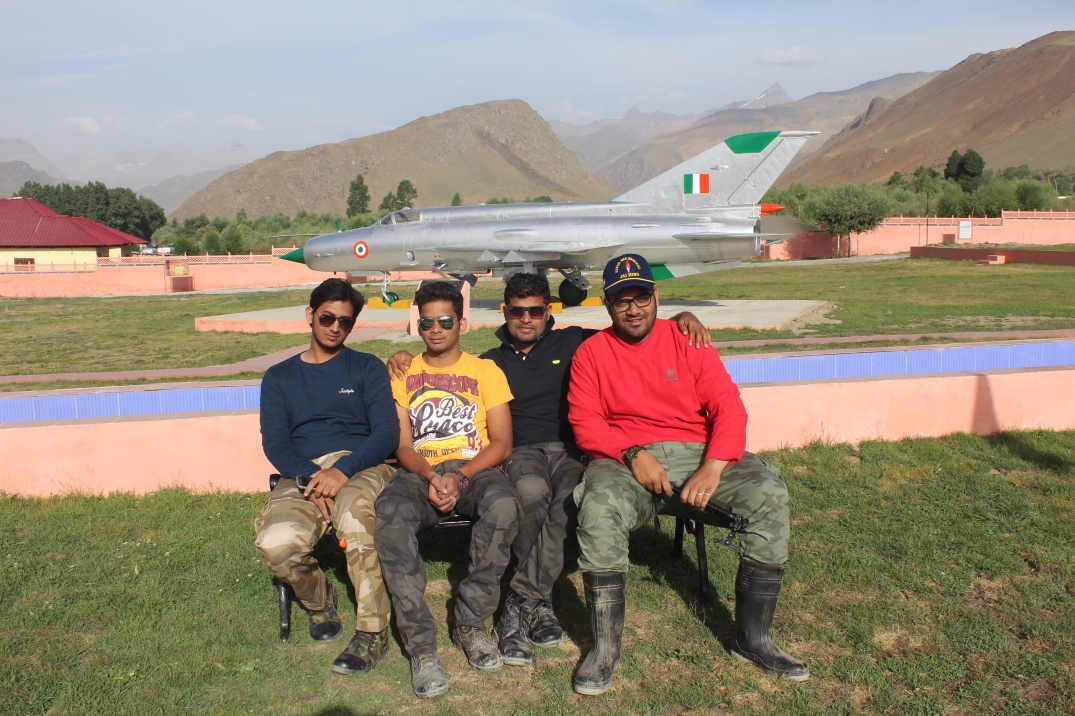 The prime attraction of the whole memorial is the Sandstone wall, which has the names of all the Indian army personnel, who laid their lives during the Kargil war. There’s a small gallery displaying various photographs of the soldiers who fought the war, photos of soldiers celebrating the victory after the war, letters written by soldiers during the war, weapons used in the war etc. 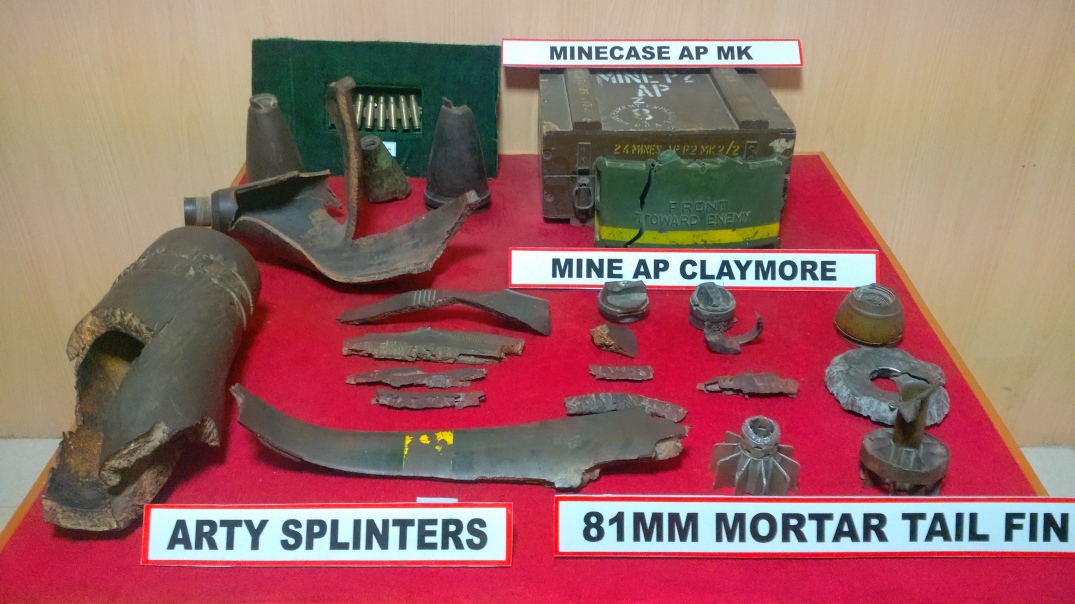 The memorial also has a memento shop, selling caps, T-shirts, coffee mugs, etc. I took a Cap with the logo of the Kargil War Memorial as a souvenir of that historical place.

It was 11 am and the ceremony had not yet started. Leh is almost 280 Kms from Dras, hence waiting more was not an option. We were already late and had to reach Leh before the sunset. Having our breakfast at the canteen in the War Memorial we again left towards our hotel. Reaching there we found those two still sleeping. Waking them up we started arranging our luggage.

Alas! Around 1 pm we commenced our ride from Dras to Leh. We were far behind of our schedule. All of us knew that we would never reach Leh before sunset and riding at night would be a tough and dangerous task. We decided to cover as much distance as possible during the day without taking many breaks. Spending the night at Lamayuru was kept as an option in order to avoid riding at night. The road from Dras to Leh is winding at some patch but it is in excellent condition passing through some magnificent barren landscapes. 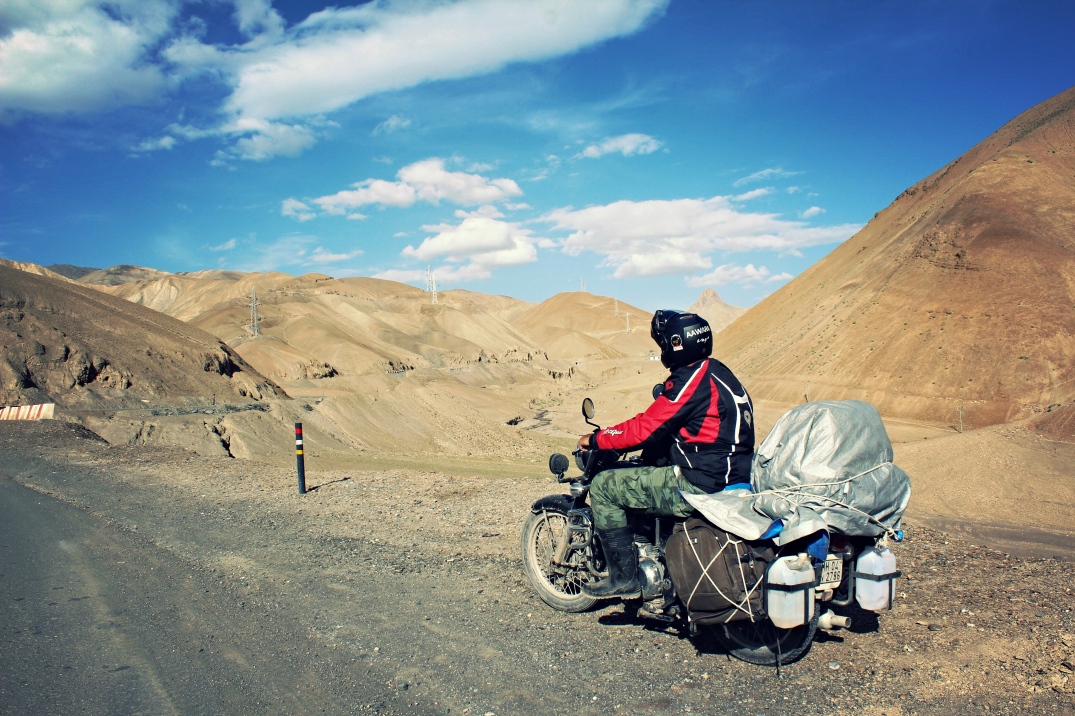 The sun was about to set and we had not even reached Lamayuru. Left with no other alternative we continued our expedition in the dark. The barren mountains which look scenic during the day, appeared equally spooky in the dark. Being extra cautious we were riding in a line with a minimal speed. The highway was extremely secluded at night. We rode for hours in the dark, but didn’t see a single vehicle passing through that road.

Reaching Lamayuru around 8.30 pm, we made a halt outside a gloomy place which turned out to be a hotel.The journey was not over yet, Leh is approximately 110 kms from Lamayuru. Some of us suggested to spend the night at that dreary hotel while others wanted to continue the journey. After having a prolonged discussion we finally decided to continue our ride and reach Leh.

Riding at night is uncertain and should be avoided if possible. The loud noise when you cross a bridge or mere the sound of flowing river is appalling at night. Hence it is advised to leave as early as you can in the morning so there’s not any risk involved and also you don’t miss the beautiful landscapes on your journey. After riding close to three hours in complete darkness, we eventually reached Leh at 11.30. We were releived to reach there safely and talk to our families after two days.

Not a single hotel was open when we entered into the city. Two people among us had been to Leh in 2012. They had the visiting card of a person named Mr. Khan who has a decent guest house close to the main market. Sometime around 12 we reached his guest house. With unloading of luggage from our motorcycles and carrying them to the second floor of the guest house, the tiring day came to an end.

To know how we spent our first day in the majestic Leh read my next blog!

3 thoughts on “Dras to Leh via Kargil War Memorial.”